Race and poverty in Henrico County

The ties between race and poverty separate the five magisterial districts of Henrico County; the two share a toxic relationship with crime and even danger in our communities.

It is true that the average American doesn’t read Henrico County, Virginia and think – danger – but statistics show the surprising amount of law-breaking that occurs within the boundaries of the county.

Over the past three months, high incidences of five crime categories: assault, larceny, the possession of illegal weapons, prostitution and auto theft, have distinguished the “most dangerous” district in Henrico County. 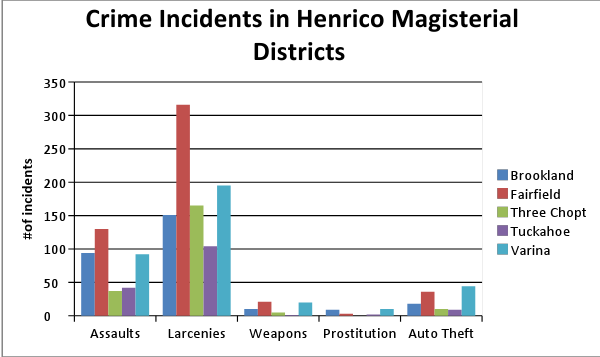 Brookland district took third place for number of crime incidences in all categories, and Tuckahoe district, followed closely by Three Chopt district, maintained the lowest numbers in each category. 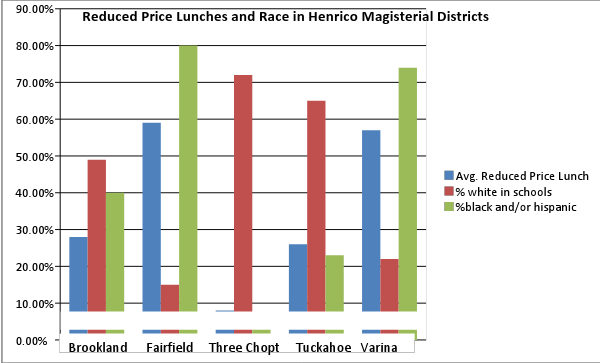 Brookland comes third, and once again, Tuckahoe and Three Chopt districts enjoy not only neighborhoods with less crime but also schools with wealthier students and thus more funding and higher test scores.

According to federal guidelines, a family of four making $24,600 is classified as below the poverty line and can received discounted school lunch. Looking at the graph again, the link between race and reduced price lunches is astounding.

This connection between poverty, race and crime is not a new facet of society – but to see the numbers plainly demonstrate the vicious cycle is a poignant reminder that a child born into Fairfield district is more vulnerable to crime than a child born in Tuckahoe district, for no reason other than his or her geographic location.

The same student born into Fairfield district will attend schools with impoverished families by nature of the continued de facto segregation that exists there. In Varina district, second in crime and reduced price lunches, with a majority racial makeup of minorities, students will experience the same thing.

506 total crimes occurred over the past three months in Fairfield district. In the same time period, Tuckahoe district had 158 total crimes.

Yes, we can say clearly that Fairfield is the most dangerous district in Henrico and Tuckahoe is the safest one. But what makes a neighborhood safe? Fewer incidences of crime? More white people? Or less poor ones?